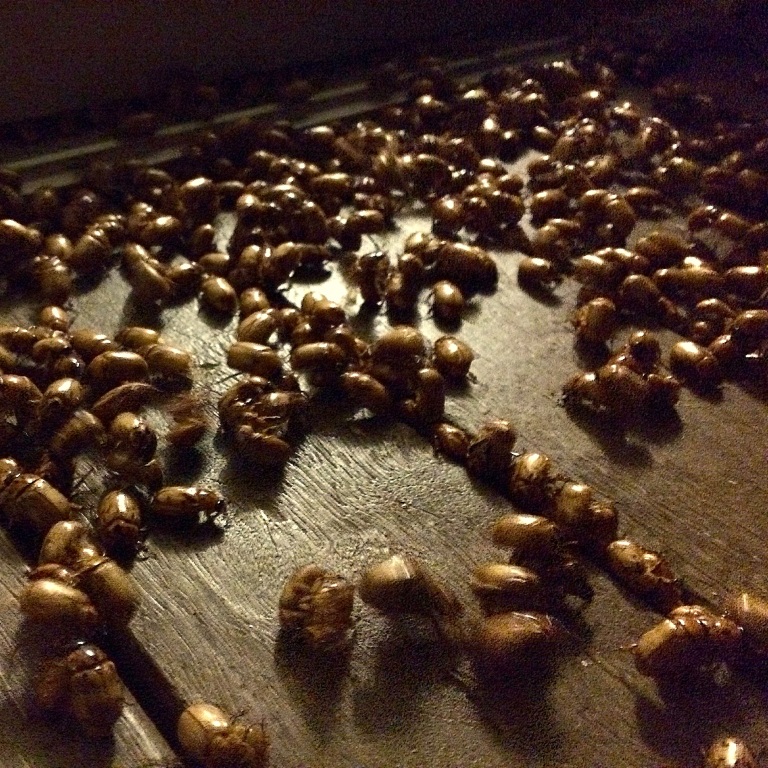 Hundreds of  Argentine Lawn Scarabs flew into the glass door at night then scratched around the wooden boards of the verandah searching for a mate.

Thanks to Chris Reid from the Australian Museum for correcting my identification of the beetles in this post. What I had thought were Christmas Beetles were in fact non-native Argentine Lawn Scarabs. Read his comment for more information. Summer and introduced species? Another reason not to like this season …

I’ll admit it … I am not a summer person. In fact just the anticipation of the the mind-numbing, body-bloating heat of the Australian summer is something that I dread the moment winter fades away. There must be a point to summer, but I just don’t get it.

However there is one thing that slightly redeems these humid and draining months: the brief onslaught of Christmas beetles. For about a week these beetles emerge from the earth and swarm around street lights and brightly lit windows. This mass event is something that marks the beginning of summer.

The beetles fly clumsily into walls and faces, often getting stuck in long hair and clothing. Their long spindly legs claw their way across skin and clamp down when feeling threatened. Needless to say these beetles have a certain creepy value. Their buzzing and whirring as they fly through the night air is something I’d like to add to my list of Australian Gothic sounds.

Each year I have tried to record the arrival of the as they circle our outdoor light in their hundreds. These recordings have never been very successful as the beetles invariably fly into the microphone. After these recording sessions I return inside with beetles covering my body.

This year I tried a different approach by recording the beetles as they flew into our kitchen window. The multiple thuds as they hit the window give some indication of the mass of beetles swarming outside.

So these beetles and their characteristic sounds are a soundmark of the Australian summer. I’m not sure if it is enough to help me appreciate summer but at least there is something to consider as the sweat trickles down my face. (Though now we know that these are in fact an introduced species, impostors! One less thing to like about summer).

7 thoughts on “Swarm: the onslaught of Argentine Lawn Scarabs.”