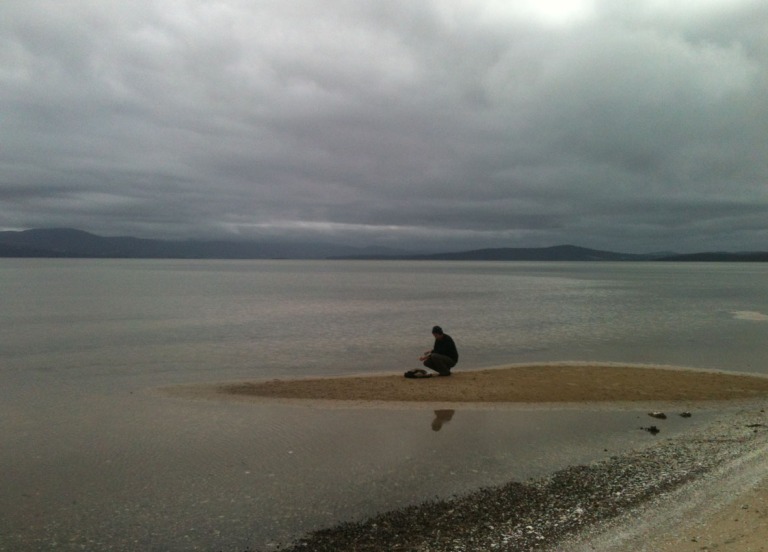 A simple love of sound first sparked an interest in recording the world around me, however what has sustained this interest is the connection between sounding objects and their socio-historical contexts. An example of this can be found in the following recording where small ripples pass over hydrophones at D’Entrecasteaux Channel, the site where Truganini’s ashes were scattered 100 years after her death.
The year has begun with a lively debate regarding the direction and role of field recording. On sites such as The Field Reporter questions have been raised regarding several aspects of field-recording-based productions. Reading a number of posts there are three recurring concerns in the debate:

1st: the perception that there is an elitism in field-recording which fails to foster an audience beyond other field-recordists.

My response: field-recording lacks a strong theoretical structure in which to interpret it – unlike other disciplines which have had centuries of trained thought to support them field-recording is still young and relatively unknown beyond its circle of practitioners. A stronger theoretical base might increase its profile beyond the majority of us whose work only exists on nebulous internet platforms.

2nd: the rise in cheaper technology has enabled less professional recordists to saturate the pool of field recordings with “second-rate” work.

My response: expensive equipment does not guarantee a good ear or a good technique. Nor does it provide interesting ideas on what subject to record. Indeed, starting with low-end equipment can make the recordist much more resourceful and creative.

3rd: the perception that field recordists are increasingly focussing on sounds from exotic, or developing, locales in a way that reeks of neocolonialism.

My response: for those without the financial means these recordings present us with a world we might never experience. Listening to such recordings has the potential to increase our sensitivity and wonder towards the world’s cultural and environmental diversity making us much more likely to respect our global heritage rather than devastate it.

The tone of some critics in the current debate seems quite harsh, especially when one of the primary aims of field-recording is to promote the experience of listening for everyone rather than a limited, exclusive, few. In any discipline there will always be a hierarchical structure which defines what is of value, a canon to instruct us as to what is “good” and what is “not”. As we have seen in art and literature the inherent danger of a canon is that it benefits some while disadvantaging others. Is this recent debate the beginning of such a process?

Every debate should forward some positive elements so this post will conclude with a promotion of some field-recordists whose work I listen to regularly. By following their work over the past few years I have listened to sounds from all corners of the earth, they have sharpened my ability to listen and broadened my sense of place in the world:

Sebastiane Hegarty: a British artist, writer and lecturer whose recordings have featured on radio and film.
John Grzinich: an American sound and video artist now living in Estonia, he also co-ordinates the MoKS residency program.
Des Coulam: a British ex-pat living in Paris, he documents the many sounds of Parisian streets, arcades and subways.
Vladimir Kryutchev: a Russian reporter and field-recordist who documents the sounds of local village life.
Magnus Bergsson: an Icelandic field-recordist whose recordings focus on the urban and natural spaces of Iceland.
Ian Rawes: a reporter and field-recordist for the London Sound Survey.
David Velez: a Colombian field-recordist whose recent essay “El Coyote” is an immensely insightful and sensitive reflection on why he chooses to record the subjects that he does.