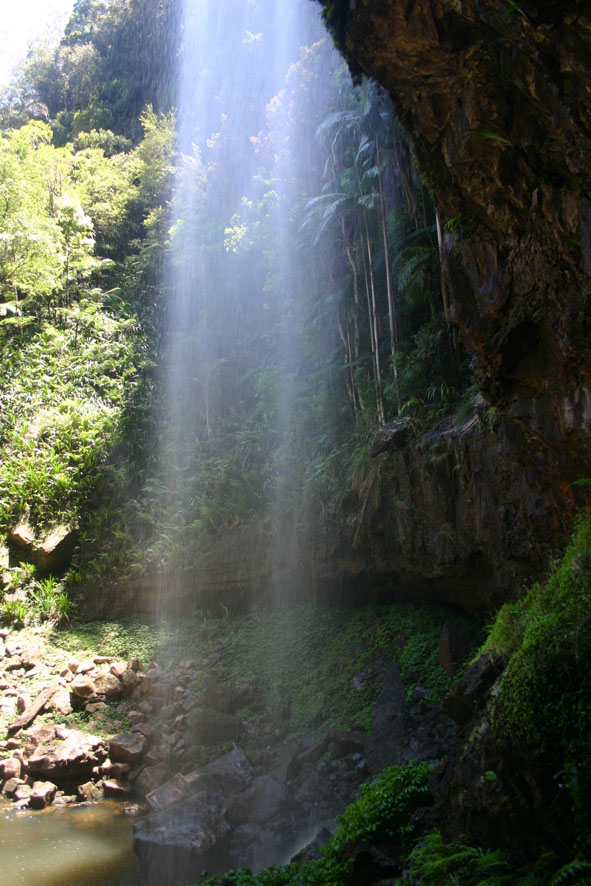 Protestors Falls is named after the 300 people who participated in Australia’s first environmental blockade in August 1979. Without the protestors’ perseverance sounds such as this might have been lost:

A recording taken near the base of the falls, a forest pigeon calls in the background.

The environmental activists camped in the forest surrounding the waterfall for one month in order to stop the logging of 300-year-old Brushbox and Blackbox trees. The forest in this area shares a history with the ancient supercontinent Gondwanaland, providing an evolutionary link that is millions of years old. It would have been an immeasurable loss to destroy this connection to the past.

The government finally bowed to the demands of the protestors after a rally of 2,000 people entered the logging site. An Environmental Impact Study was granted, resulting in the creation of Nightcap National Park in 1984.

Today the park encompasses 8,145 hectares, of which 5,000 hectares is protected under World Heritage legislation. The park is home to several threatened plant and animal species. One tree, the Nightcap Oak, was only discovered in 2000. One endangered species, Fleay’s Frog, lives within the park due to the relative purity of its water.

The force of the waterfall produces currents under water forcing the hydrophones to bounce along the bottom of the pool.

If not for the actions of the 300 protestors this sanctuary would have been ruined. In retrospect this seems unbelievable, however the fight to preserve existing rainforests throughout the world is obviously far from over.

From a field recordist’s perspective the loss of biodiversity also involves the loss of sonic diversity. With each loss of habitat comes the silencing of sounds specific to that space. While field recording can capture the sounds of sites before they are destroyed, is there really a potential for it to play a role in protecting the environment into the future?

If a picture is worth a thousand words, what is a sound worth?