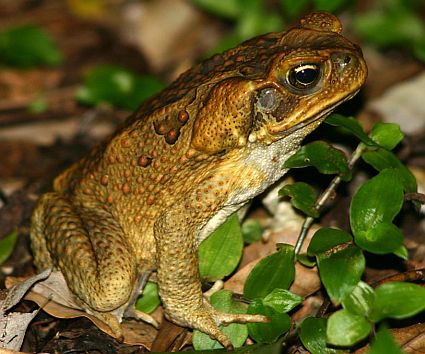 Months ago in autumn millions of Cane Toads in Australia went into hibernation. Nights fell quiet as they slept under rocks and logs.

Their re-emergence is not particularly welcome in our fragile environment. Since their introduction from South America in the 1920s their population has exploded. Without any natural predators they have taken over Australia’s water-ways. Lakes, ponds, and lagoons are now crawling with a species which, ironically, was introduced to combat another pest: the cane beetle. Their poisonous glands have caused the decline of many Australian animals who mistakenly saw them as an easy source of food.

It is difficult to love this animal, however it is now an integral part of Australia’s summer nights’ soundscape. For hours during the night their call can be heard along the ground in a somewhat mesmerising and hypnotic drone. This soothing tone is quite incongruous with its unappealing history and place in Australia’s ecosystem. This clip presents the final few minutes of a single cane toad’s “call”, before it peters out into silence. Alongside it is the flat-line sound of a cicada which has also emerged into the warmth of spring.